January 31st Speaker At the Firehouse 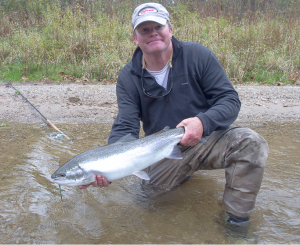 Noted Michigan fly fisherman, Kevin Feenstra, will be the featured speaker at the January 31 Ohio Central Basin Steelheader meeting at the Firehouse in Willoughby Hills, OH. Kevin’s passion is swinging flies for migratory fish, but he loves to fly fish for any predator that swims.   He now resides in Newaygo, Michigan, guiding around 200 days/year on the Muskegon River System (and fishing whenever he can).   His flies have been published in books, magazines, and online and he has written articles for international, national, and regional fly fishing magazines.

Kevin is featured in a handful of DVDs and has authored current DVDs for steelhead and smallmouth bass. His most recent title is “Striking Steel” a DVD about Midwestern steelhead fishing.   Other current titles are “Searching for Steelhead” and “Big Appetite, small mouth”.

All OCBS meetings are open to the public and free. You do not need to be a member to attend.

A total of 15 fish 24 inches or greater were check in for the Tournament.

The 1st Leg of the OCBS Members Only Steelhead Tournament was held on Sunday 4 November 2018.  A partly cloudy day with temperatures in the mid-fifties. Heavy rains earlier in the week had the major tributaries blown out. However, the smaller streams and high gradient tributaries were fishable with adequate flow and visibility.   Record rain fall earlier in the week triggered good numbers of fresh fish into the river systems.

Anglers enjoyed steady action throughout the day, but the majority of fish were under 24 inches in length.   A total of 10 fish over 24 inches long were check in for the tournament.

The 2nd Tournament Leg will be held Sunday 18 November 2018.  Be sure to mark your calendar and plan on fishing this Leg.